Watching all the media coverage of the 2019 UK General Election reminded me just what an important role elections and politics have played in my dyslexia campaigning over the years.  And just how hard we must push the new British government to embrace our issue and the urgent changes needed to support dyslexic students.

This is where my campaign journey began – back in 2005. BBC News – Dyslexia Party Runs for Government

This is me and my son Ted back in April 2005 when I started my first dyslexia charity campaign, Xtraordinary People.  After a really, really rough start with Ted’s schooling, we were lucky to be able to send him to my old school which is great with dyslexia.  Knowing how truly desperate my family felt during his rough times, and how things transformed for him with the right support, I felt deeply compelled to try and change things and help others.

So as soon as my 2 dyslexic boys were settled in, and on course, I started Xtraordinary People and set off as a ‘mum on a mission’ to make change happen. I spent weeks trying to get an appointment with the Dept of Education, but to no avail, and as I began working with the other UK dyslexia charities, I discovered they’d had no luck with talking or meeting Government either.

There was a General Election planned in May 2005 and I hatched a mad plan to get Government to take notice…I’d stand as a candidate for my cause against the Education Secretary, Ruth Kelly.  So I formed a ‘political party’ called Xtraordinary People, with just 1 candidate (me!), on a manifesto with just one issue (dyslexia). Read the BBC news report about it here.

Before the election, along with all the other party candidates, my name was read out at the Town Hall.  Not long after my phone rang …. Ruth Kelly wanted to meet!  Before the election, we met and discussed dyslexia. I raised my issues and she promised to work with me if she was re-elected.  Mission accomplished (and I actually managed to win a few votes too!).

Ruth was re-elected and she resumed her role as Education Secretary; we eventually began working with Government on a project called ‘No To Failure’. We ran pilot projects in schools across the UK to demonstrate the link between children failing in school and unsupported dyslexia.  We trained teachers, screened students and put in evidenced based dyslexia support which saw ‘failing’ children flourish in front of everyones eyes.

In 2006, BBC1 filmed a fly on the wall documentary about my work supporting dyslexic kids in a secondary school in Walworth, a school that served one of the poorest and most disadvantaged areas of London.  We filmed there with the BBC every day with regular visits from the Education Ministers and advisors, who couldn’t help but be moved by the progress we were seeing with the kids. Read BBC report here.

The ‘No to Failure’ project showed a massive link between unsupported dyslexia and kids ‘failing’ SATS, leaving school unable to read write and do maths. The project also showed that with the right support, these kids could can learn…and do well.  As a result, the Government commissioned an official review, The Rose Review of Dyslexia which was published in June 2009 along with a £900,000 investment into teacher training. 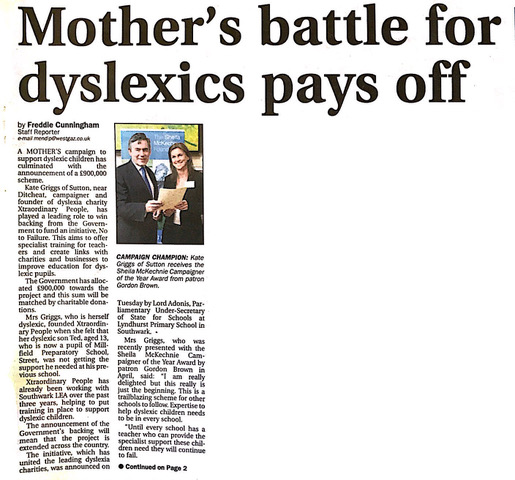 Job Done….well for a while anyway.

Everything looked like it was on the up, and with the Dyslexia charities now working together to implement the Rose review funding, I stepped back from ‘campaigning’ to begin researching my passion, Dyslexic Strengths.

Then in 2010 another general election saw a Conservative Government come to power, we had a global economic downturn resulting in austerity and cuts; over the next 5 years it all went downhill.  The investment into dyslexia teacher training stopped. Most of the teachers we trained were lost as cuts impacted on Special Educational Needs funding. I watched in despair as my campaigning work unravelled in front of my eyes.

At the same time, my research was finding that Dyslexic Thinking skills were much in demand, aligning perfectly with the skills which the World Economic Forum (WEF) were highlighting as essential skills for the future of work…something I spoke about in my first ever TedTalk!

But while the WEF were highlighting the need for skills which come naturally to a Dyslexic, our Government was bringing in exam forms that would seriously disadvantage every dyslexic student, made worse by a backdrop of reduced dyslexic support in schools.  I could see big trouble ahead.

Time for Made By Dyslexia

So in 2016 I dusted off my campaigning boots and got back on the campaign trail.  This time, I won’t stop until we’ve sorted this once and for all.

In May 2017 Made By Dyslexia was launched as we mean to go on, with a bold and ballsy campaign involving a ‘Dyslexic Sperm Bank’ and Richard Branson!

We’ve come a long way in 2 1/2 years. We’ve produced 2 reports with EY Value of Dyslexia 1 and Value of Dyslexia 2 which put rigour around our initial findings that the workplace of tomorrow needs Dyslexic Thinking.

We’ve held 2 Global Summits bringing together business and thought leaders, celebrities VIP’s, royalty and charities from all around the world, to discuss and recognise the Value of Dyslexia in ALL our futures.

In 2018 we partnered with Microsoft to create free, scalable global solutions.

This year Gibraltar became the first nation to sign the Made By Dyslexia Pledge with more to come in 2020.

We’ve had turbulent times in British politics since the Brexit vote, meaning it’s been hard to create any tangible change with Government.  But as this blog highlights, Elections bring great change for us Dyslexics, so I say this to the UK’s New Government, whoever you are, it’s time to knuckle down and work with us to recognise the Value of Dyslexia…and make real change once and for all.